1902: In October, three men met together for Christian fellowship at no 42a St James Road.

1903: Nine members formed the Church in January; Mr W H T Chillman was appointed its first Minister. In June, the original corrugated iron church building was opened on the present corner site - at a cost of £418.

1909: Rev Ellis resigned over a financial issue - church without Minister for two years.

1912: Rev Bruce resigned over a dispute about the Baptist Union's Sustention Fund.

1914: Mr George Walker appointed Co-pastor to assist Rev Willis, who was in frequent demand locally as an Evangelist.

1916: Rev Willis resigned to take up his calling as a missionary to Japan; Rev Walker was affirmed as Minister.

1924: Church assumed oversight of the Baptist Fellowship at Abbots Langley, which it did so for the next ten years. A nucleus of members formed the Holiness Church in Balmoral Road, North Watford. 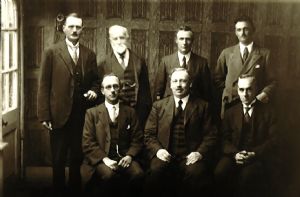 1928: The house adjoining the Church, no 7 St James Road, was purchased for £400 and a classroom was built in the back garden.

1929: A year after the event, the Church celebrated its 25th anniversary with a series of special meetings.

1936: A Building Fund was set up to raise money for a new Church building.

1951: New organ purchased in faith, in anticipation of a new Church building, at a cost of £1,450. Rev George Walker died in spring at the age of 67, just prior to a planned visit to South Africa.

1952: Rev Roy Bell from London Bible College (LBC) appointed new Minister in March. Church purchased house at no 21 St James Road and the adjacent orchard at a cost of £2,400; the house was then used as a Manse.

1954: Again a year after the event, the Church celebrated its Golden Jubilee with a series of special meetings.

1955: A new building was erected on the old orchard site - designed in faith as a Church Hall, but to be used temporarily as the main Church. The original corrugated iron building was then used as a Hall following the opening of the new building in September. 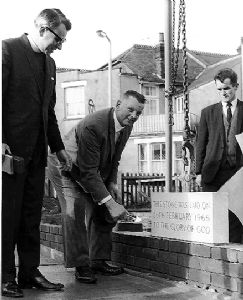 1965: Unconditional Planning Consent granted by Council. The old corrugated iron structure was demolished, and building work commenced on the site in December.

1966: New building, including pipe organ transferred from the 1955 building, completed, and formally opened in December. The 1955 building then became the Church Hall, as originally envisaged.

1986: Church purchased neighbouring fire-damaged house at no 5 Farraline Road at cost of £50,000.

1987: Short-lived experiment of holding parallel morning services in a disused Church in nearby Watford Fields. Rev Doig left to take up a new ministry in Peterborough.

2003: Church celebrated its Centenary, with numerous special events and services during the course of the year, including visits from most of its surviving former Ministers.

2012: Rev Stephen Harrison left to take up the post of Chaplain at Douglas & Helen House, Oxford, a hospice for children and young adults.

2013: Mrs Muriel Finerty passed away in January. We celebrated our 110 years aniversary on Sunday 20 October.